Of Stick Ball and Riots, Or, Why Am I Armed at a Protest?

It's been a while. But it hasn't been a that long.

I've been home for about a week. But I'm still reeling from what happened.

This is part of a text thread between me and a friend: 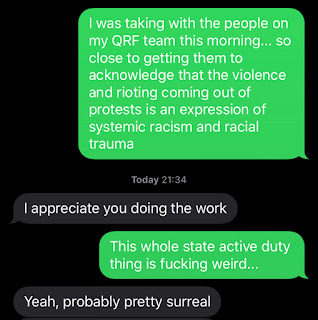 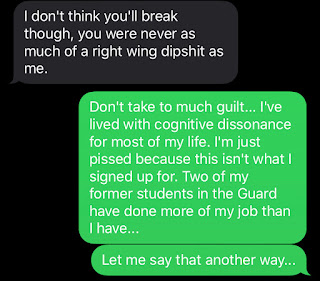 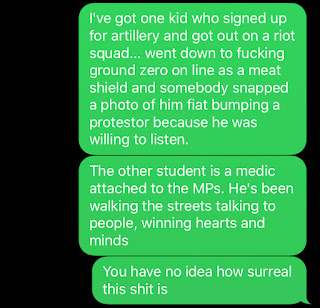 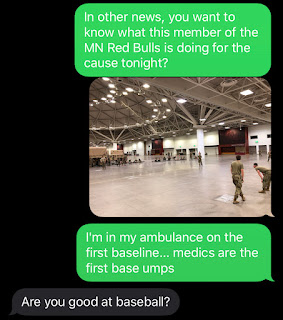 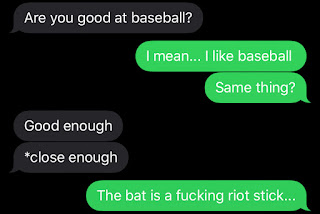 Yeah, I was activated as a part of my National Guard unit to go and quell the riots in Minneapolis. I was told that it was the first time since World War II that the entire Minnesota National Guard had been activated for a state-side mission. I bet that you can feel my pride swell from where you are, dear reader.

Let me tell you another joke:

I went to drill on a Wednesday. It was scheduled to be a 5-day drill, and I was ready for that. There was a lot of work to complete so that we could take part in the annual training exercise, and our higher ups had decided to take five days to accomplish all of it.

Since we had a long haul, we were allowed to kick back in the barracks after our duty day was done. We could play cards, kick a soccer ball around, have a few drinks... we just needed to be racked out at 2300 (in other words, our bed time was 11 pm). On Friday night, I volunteered for the Courtesy Patrol, meaning I would supervise everyone else's fun and make sure nothing got out of hand. It wasn't a crazy night and I was racked out soon after lights out.

Just a few hours later, around 0130, our First Sergeant busts through the door, flips on our lights, and tells everyone to wake up and get dressed (of course he used more colorful language than that). As we began to get dressed and organized, we tried to figure out who was sober enough to drive after less than two and a half hours. I hadn't had a drop to drink, so I was tasked with going to the motor pool and drawing out a wheeled ambulance (usually I'm in a tracked, tank looking thing for an ambulance). Before noon the same day I was rolling down the highway in that ambulance, fully stocked, on orders that would take me down to Minneapolis to stop the protesting and rioting.

The problem is that story is all about me.

Let me tell you about George Floyd.

No, let me tell you about Breonna Taylor.

No, how about Philando Castile.

Maybe I should start the story with Ahmaud Arbery, Trayvon Martin, or Botham Jean.

But no, I don't get to tell their stories. I didn't even get to march under their banners and shout their names so that maybe their deaths would mean something.

No, I got called up to support the police. The Minneapolis Police Department needed the help of those of us in the green camouflage uniforms, so I was ordered and I went. Even though I would have much rather have been marching on the other side.

It was strange. It was surreal. So we played stick ball.

And of everything going on, the pandemic, the riots, not knowing when I would be allowed to go home to see my family, what I fixated on in the midst of this was that we had no bat, so we used a riot stick. If that's not a cosmic joke, I don't know what is.
I think the best part of this whole joke is the punchline: I signed up as a medic in the Minnesota Army National Guard, and I ended up boots on the ground, chilling in the parking lot of MPD's 5th precinct on Lake Street in Minneapolis with a loaded M4 in my hands.
Don't get me wrong, I knew about that part of the job when I signed up for the armed forces. I understood that I would need to qualify on a weapon system. But it's not the weapon itself. I've been shooting since I was old enough to do it safely. It's that I signed up to be a medical asset.
When I went through my initial training, it was made very clear to us that we would probably be shot at, even with the gigantic red cross on the side of our vehicles, and that we were not to fire back. According to the Geneva convention, I am a non combatant. The only reason that I carry a sidearm is for the defense of my patient or myself.
So why did I drive an ambulance down Lake Street and then hop out and receive an order to increase my level of force?
Our arming level and use of force should match the threat level. I understand that maybe there's intel to indicate more aggression than I can see, but at the same time I didn't see any protesters and nobody was presenting any aggression toward me. I had no patients to defend. So why did I have these bullets loaded into this weapon in this city? My city?
Yeah. So this is what I've been grappling with. Isn't cognitive dissonance great?!?
Posted by Tom Lutes at 9:14 AM

Get new Speaking of Bones posts sent to your inbox